WAAN represents the musical marriage of seasoned saxophonist Bart Wirtz and keyboard wiz Emiel van Rijthoven. As a pair of self-confessed tech nerds hailing from The Netherlands, their bromance was a slow burning one, but nevertheless their eventual collaboration fulfilled a dream that they’d both held close since first working together back in 2010.

Bart grew up in a very musical household, schooled by the record collection of his father, who also played guitar and valve trombone, and encouraged his young son to take up an instrument. Being one to think outside of the box, Bart plumped immediately for the bagpipes! He had been inspired by a traditional Scottish record he’d heard, but (luckily for us) learning the instrument wasn’t an option at his school and, as Cannonball Adderly was also a favorite, he began learning the saxophone. Having started to play in informal sessions, by the age of sixteen he joined friends in hip hop, funk and jazz bands and soon had a clear vision that this music was to be his life.

At eighteen, he went to the conservatory (the Dutch college system) to study music, during which time he played in several more groups, and at the age of twenty-two he travelled to New York City where he took private lessons with musicians including the legendary U.S. saxophonist Gary Bartz. He then moved to Amsterdam, undertaking further study at the conservatory there, before finally settling on concentrating on his own work as a bandleader with four solo albums – one of which won an Edison Award (the Dutch Grammy) and the last of which featured Emiel. Bart also worked with esteemed outfits Monsieur Dubois, The Young Sinatras, the New Rotterdam Jazz Orchestra, and the Artvark Saxophone Quartet, with whom he still plays today and has made ten albums with so far.

Just as Bart’s main influence was his father, it was Emiel’s sister who inspired him to enter the world of music. In his formative years, she was already at the conservatory studying as a vocalist, and regularly filled their home with the sounds of Quincy Jones and Herbie Hancock. Duly motivated, an eleven-year-old Emiel started learning the piano, whilst also satisfying his passion for electronics, which he studied for four years before going to the conservatory to major in jazz piano. Here the very conservative jazz tutelage was counterbalanced by Emiel’s growing love for electronic music and his desire to expand his horizons outside of traditions – something that continues to this day. He formed a Brazilian band, called Sensuàl, with fellow student and vocalist Eva, who were together for ten years touring and recorded three albums, one of which also won an Edison Award. When Eva left the band to start a family, Emiel started playing with Dutch Eurovision star Waylon, with whom he performed for another decade, before finally settling down with his musical soulmate, Bart.

The pair’s first meeting, though, was a somewhat forced affair. It occurred in 2010 at the Paradox club – an esteemed jazz venue in Tilburg, in the southern Netherlands. It was the club’s open-minded approach of inviting musicians of different styles to play together as an ensemble that finally got Bart and Emiel in the same room. They wrote and played together, and quickly formed a deep bond. Their styles complemented each other perfectly, they listened to each other, and both shared a desire to play expansive, experimental music.

This turned out to be something of a singular encounter though, and the duo didn’t connect again until Bart asked Emiel to join him in the studio five years later. The saxophonist had been looking for a synth and keys player to help take his music to more out-there places, and Emiel fit the bill perfectly. Having tried to involve the whole band in the creative process, Bart realised that his writing relationship with Emiel was the only one that clicked and, taking the music recorded with the band as a starting point, the duo we now know as WAAN (a Dutch word meaning “craze”) were formed. Consequently, the pair began to work with session musicians, keeping their vision solely between the two of them, and found themselves behaving more like dance music producers than traditional band leaders.

The new dynamic worked though, the result being their debut album Echo Echo. With influences as disparate as Floating Points, Belgian band Stuff, BadBadNotGood and Eddie Harris, the album is far more complex than just being a dance music influenced jazz record. Co-producer Oscar de Jong, of Kraak & Smaak fame, encouraged the pair to play freely as part of a jazz group and then add the electronic elements. As a result, the album owes as much to Duke Ellington and Lalo Schiffrin as it does NERD and The Eurythmics! 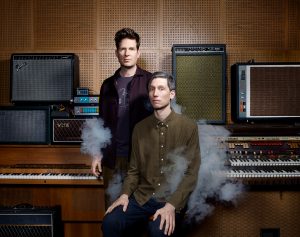