when it comes down to define the city´s internationally highly acclaimed “sound” these days, eva be is the dj of your choice. moving elegantly between genres like house, dub and leftfield subgenres, she embodies the openness and the drive berlin stands for.
this results from eva´s upbringing within the berlin underground music scene, where she started djng around the dj and producer collective jazzanova at the age of 18, soon becoming a constant member of the famous sonarkollektiv.
her debut album “moving without travelling”on best seven/sonarkollektiv, heavily inspired by eva be’s long lasting love for dub and reggae, got huge international attention and is a milestone for the dub / electronic movement in berlin, also thanks to picking the right guest musicians like fat freddie´s drop singer joe dukie, sugar B or pegah ferydoni, helping her to catch this “special vibe”.
it was a logical step, this release kicked off numerous remixes for well established artists like horace andy, jah wobble, micatone, recloose, maertini broes and ben ivory – to mention a few…
…by the year 2007 eva´s musical focus changed a bit further towards a more electronic terrain, resulting in the clearly more dancefloor orientated releases like “new crack“, “confusion of a lady”, “pervertstorm”, or “closer” and “no love” ( both featuring singer ben ivory )
in 2012 eva got to know berlin oldschool dj legend cle, and found a dj and production partner, who would share her love for dub and electronic music in a similar way and very soon they build their very own production situation, resulting in the project
“LoYoTo” – putting out remixes for minipops jr., ben ivory and a first own EP
“looking at the starz” on UPON YOU recordings.
though her style and skills are internationally highly acclaimed, the inspiration for her creativity is – and always will be – berlin.
so there is always a good chance to catch her in the city´s musical hotspots:
panoramabar, watergate, wilde renate, //:about blank…

Trippin On Eva Be, 12inch 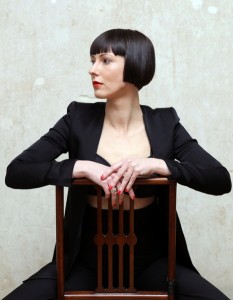