Arnold Kasar is a musical jack of all trades: in countless projects around the Berlin based label Sonar Kollektiv, the musician grown in the southern area of the picturesque Black Forest left his traces, among them Nylon, AtomHockey or with Volksbühne-player and latest Internet-Hype Friedrich Liechtenstein („Supergeil“).
However, the trained sound-engineer is also capable of going solo, as he proved with his solo debut „The Piano Has Been Smoking“ in 2012. Now he returned to his first instrument and his timing couldn’t be better, since the piano returned to new strength in the music world, as the numerous releases of pianists in the past few years have shown.

„I really hope that the timing is good, but I can’t influence it. At last I do it for my own. When I started doing music as Kasar back in 2010, I just didn’t know Nils Frahm or Brandt Brauer Frick. All these people weren’t on the spot by then. I listened to Gonzales and of course Hauschka and Craig Armstrong were there, too. Yann Tiersen was totally famous at that time“, the pianist explains his view on his colleagues when he started making music by himself. But, with releasing his second album „Walk On“ at this point, he didn’t intend to flirt with a hype. The piano, which has accompanied Arnold Kasar from his childhood on, always just fell out of the recordings in the past. Due to this enduring relationship to his first instrument he got bored of it. Instead, he preferred to dedicate himself to sample-based electronic music with his friend Friedrich Liechtenstein or making Nu Jazz in several musical projects around the world-famous Berlin based Sonar Kollektiv (home to Jazzanova, The Black Seeds or Solomun). But sooner or later the piano had to return to the centre of attention.

That was in 2010: at that point the work on the new LP „The Piano Has Been Smoking“ had started, being released in 2012 and fully concentrating around the piano. By then Kasar already used the technique of the prepared piano, which once was introduced by John Cage and nowadays is excessively used by Hauschka, among others. For this Kasar used erasers, tea bags or patches to manipulate the sound of the piano and to bring out unheard and exciting tones of his instrument. Only one song, the designated single „Put A Light On Me“, was supposed to have a vocal track, but after he didn’t find the right voice for it, he simply sang it himself. Like this, for the first time the world got to hear the dark and melancholic timbre of Arnold Kasar. The desired airplay (i.a. Austrian „FM4“ or Berlin’s „RBB RadioEins“) was achieved easily and from that moment on Kasar was delighted by the idea of singing on his own productions, since he had closed the chapter of producing an album on a prepared piano anyway. For this reason the comparison with an artist such as Hauschka, who made this technique the concept of his own creative work, is merely adequate. Kasar rather walks on, restless and always willing to try something new.

But this doesn’t mean that he has to quit it completely: also on „Walk On“ one finds a few pieces with the support of the prepared piano, but this time the singing is clearly in the foreground. Like this, the whole vibe of the record changes: „I’d say the last record was way more a city record“ referring to the by then used techno-elements, for example, „and the new one is a record for the countryside.“, especially inspired by Arthur Russell’s most intimate album „World Of Echo“. On this record the composer who rose to cult status in the past years leaves the disco era behind him and presents a fragile artist using voice, cello and a lot of reverb only: „A song like „So Called Lover“ mainly emerged from Arthur Russell listening sessions“, Kasar tells full of admiration for the musician who died of AIDS in 1992.

Other role models are surprising as well as comprehensible: „I like singers like the early Manfred Krug a lot, this warm and tender voice – of course, in German, but the way he sang – or Japan’s singer David Sylvian, those were the things I acted on. Much songwriting-inspiration came from Wilco, Nick Drake, Aimée Mann or also Bill Callahan.

But how Kasar came to the definition „countryside record“ is a story of its own: „It is way more singing this time, that’s a huge leap, it’s much less electronics and there’s more space. It’s less town and much more landscape and for me it really is this countryside record. „Jungholz“ for example is the name of a village in the southern Black Forest, „Ödland“ is the name of the highest mountain in that area and „Ein Engel Verschwand“ is an adaptation of another village’s name there called „Engelschwand“. „So Called Lover“ takes place in „a shady town in the shore“, which in a way is a reference to the Rhine, which could be the mentioned river, and this „whipping willow“, all these are things coming out of my memories, since I originate from that area. It’s not autobiographic but I simply imagined how it was back then, sitting under the willow by the river. Partly I recorded the songs right there: „Ein Engel Verschwand“, „Jungholz“ and „Ödland“ and nearly all playbacks were recorded on the piano on which I practiced when I was a child. I always hated it to play this piano: a Hohner, awful sound, but once you used the felt pedal it got such an odd sound, really strange – that’s not the sound of a great Steinway, but small and odd.“ So all of this isn’t supposed to be autobiographic but without all these experiences Kasar gained in the depths of the southern Black Forest, „Walk On“ probably would never have come into being.

The song that gave the album its title was the first Kasar had written for „Walk On“, right after the release of his debut record. At this stage the theatre art graduate was in a downright stream of composing. Many songs were quickly outlined, however he took ages to get to the finished product. The production phase lasted – with interruptions – from spring 2012 to fall 2013. And since February this year the record is waiting to be thrown onto the market, but haste makes waste. Songs like those you find on „Walk On“, where the piano sounds like raindrops rolling down the scale, while there’s an electronic tempest in the background („Ödland“), or which are so fragile they bring tears to your eyes („Care“) simply have to be released in the dying season.

But who thinks that everything on this album is melancholic and sad is proven wrong by „Dawning“, which isn’t at all like the rest of the LP: with a jagged new wave beat, a sexy 80s sounding sax and an optimistic chorus, Kasar also shows his up-tempo side and gives some unmissable signs towards radio airplay.

A whole lot slower is the collaboration with long-time friend Lisa Bassenge, singer of Nu Jazz outfit Micatone and Kasar’s colleague at Nylon. Together they sing the hypnotic „Dance To The Mallet“, which starts off jazzy, but also offers itself – with its electronic substructure – as a huge playground for remixers. However, the way this liaison came up is rather unspectacular: „One time we went out for dinner and I told her about the album I was working on and there she immediately offered her help if I needed some. So a few months later I called her and played the song to her and she instantly liked it. She wrote the lyrics to it and then we quickly recorded it in one take. Her musical director Paul Kleber is also involved in the song „You“ and Sebastian Borkowski from Jazzanova plays sax in another song. So it’s sort of all around the Sonar Kollektiv and Micatone”. It stays all in the family. 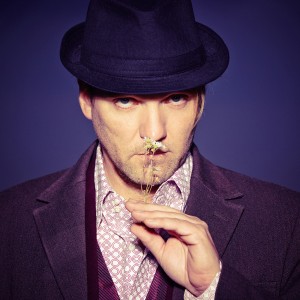