Founded in 1999, Micatone has released three albums on the independent recordlabel Sonar Kollektiv. “Nine Songs” in 2001, “Is you Is,” 2003 and “Nomad Songs” in 2005.
At the beginning Micatone developed their songs in a club-oriented environment of their label Sonar Kollektiv.
The band was a proof that computer-produced music does not need to be played by DJs only but can be also performed as a band.
The album “Is you Is,” was released in 2003 and was a first peak of Micatone.On the one hand, it was the most successful album of Micatone (15,000 units sold). On the other hand, it linked club genres like drum & bass, house and trip hop, with song structures and styles of music such as folk and jazz has become a blueprint for the nujazz genre. DJ formations such as Tiefschwarz were among their fans and wanted to remix the song “Plasticbags and Magazines”.
The Goethe Institute has been aware of Micatone and presented the band on a festival for contemporary German art in Algiers.
The band was on tour through clubs and concert halls in Germany and other European countries.

Due to the interplay of the band members and a growing interest for folk music, the band began to compose their songs with more focus on their instruments instead of the computer. The third album “Nomad Songs” was the next step on their way to create songs solely on their instruments and in the studio.

The press promo of Uwe Kerkau for the album “Nomad Songs” in 2005 and the associated radio promo of Guido Moebius put an emphasis on songwriting and the separation from the DJ-based club context.
It comes to a collaboration with Stuart A. Staples, lead singer of British band Tindersticks, Earl Harvin, longtime live drummer of the French band Air, studio drummer for Seal and Robie Williams and with the multi-instrumentalist Martin Wenk, another guest, who’s playing for Calexico and Nada Surf.
In early 2011 the album was completed. It is called “Wish I Was Here.” The songs were recorded in a backyard studio in Neukölln, Berlin. “Wish I Was Here” is the essence of Micatone, the album sounds more mature and adult.
On their new record, the musicians play with quotations from soul, surf, beat and blues. Surfing guitars, Beatles bass, funky mono drums, organ and synthesizers are enhanced by antique disco strings, harps and horns. This time Micatone have recorded their songs completely live for the first time.
In March 2012, after a seven-year absence, it’s now time for the fourth album of Micatone to be released on Sonar Kollektiv.

Boris Meinhold started his musical career as a guitarist and was interested in the late 90s to work with samplers and computers. Besides Micatone he composed and produced theater, advertising and film music (e.g. for Fatih Akin’s music movie “Crossing the Bridge”) and mixed recordings for various artists and bands in his studio.

Lisa Bassenge (vocals, composition):
Lisa Bassenge has been singing since her childhood. She has already done 13 longplayers  with various projects and can be heard as a guest on several other tracks. Together with Paul Kleber she has her own band, whose last, highly acclaimed 2011 album “Nur Fort,” was released on Minor Music in 2011. She is also the lead vocalist of the electro-chanson formation “Nylon” and writes music for theaters.

Paul Kleber (bass, drums, composition):
Paul Kleber started with cello lessons, but rather exercised the drums before he switched to bass playing. He plays alongside the projects with Lisa Bassenge also in the live band of Jazzanova, in the formation and Studnitzky jazzIndeed and as bass player on many studio productions to hear.

Sebastian Demmin (piano, keyboards)
After years of violin and piano lessons, Sebastian Demmin discovered the computer as a musical instrument. In the ‘90s he began to work with his Atari ST, various synthesizers and samplers. He has worked as a studio and live musician, producer and remixer for various artists,including Ellen Alien, Daft Punk, Burnt Friedman and others. Besides of that he is one founding member of the Berlin band “Nylon”. 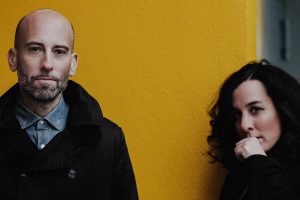