Is one of Germanies most active musicians. He is constantly touring the world with his own projects and with bands like JAZZANOVA, Nils Landgren’s FUNK UNIT, MEZZOFORTE. He is playing trumpet and piano, both with a unique sound and sense for melody.

He played weird electronic-jams in the Berlin minimal-house-scene f.e. with Moritz von Oswald or Ricardo Villalobos, writes for symphonic orchestras in crossover projects between jazz, pop, worldbeat and electronic and produced soundscapes for unusual events and installations like Germanys most successful exhibition “Magic Places” in the Gasometer Oberhausen.

There are no borders for his output. Beyond styles it’s his sound and a special type of emotion as well as a certain minimalistic character which characterizes his music. He loves the nakedness of pure and simple melodies, where one cannot hide behind complicated structures. It is silence that inspires him the most.

When he plays his own music he plays often in a duo with the double bass player Paul Kleber from Berlin (Jazzanova, Micatone), or Trio or quartet with an international line up – sometimes also with symphonic orchestras. 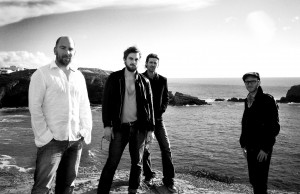