With “Fly Like A Bird”, multi-instrumentalist, DJ, and libertine Pitto from Utrecht, Netherlands, demonstrates once more his remarkable skill to package strong feelings of happiness into a both melodious and melancholic dance composition. Geurt Kersjes, aka Pitto, has always taken the liberty to leave the beaten track behind and thus develop a completely unique sound, which helps the charismatic Dutchman spark the crowd in his live shows.

A sound, however, which took years to materialize. Until the age of 16, Pitto listened to nothing but hip-hop, but then he got hold of an album by The Prodigy and was immediately thrilled by the driving breakbeat electro from the UK. Pitto now began frequenting underground clubs. Hooked by the electronic sound, he began collecting records, bought his first turntables, and started mixing for all it’s worth. The next logical step was to not only present others’ songs, but, at long last, to begin his own production.

“Even as a child, I learned playing the piano. But from a certain point, I didn’t go to lessons anymore. Playing from a music score bored me a bit. I rather wanted to play my own music,” Pitto remembers. Producing with his own computer turned out to be just the right thing for him. As an autodidact, he takes the time required for teaching himself everything. “I have tried teaching myself different production styles – be it hip-hop, NuJazz, deep house, pop or techno.” An approach which even today makes it impossible to pin down Pitto’s music to a particular genre.

At night, Pitto worked on his tracks. In the daytime, however, he pursued a usual job. “I could only make this with innumberable liters of coffee and no more than two hours of sleep,” Pitto remembers. But the extreme work ethic began to pay: In 2008, Pitto shooked European and American dancefloors with his soul-inspired house track “Sexvibe”. In 2009, he piled up with his deep “Feelin’” and, shortly after, won the “De Grote Prijs Van Nederland” talent competition in the category “dance”.

Without any hesitation, Pitto invested the prize money into his debut album “Objects In A Mirror Are Closer Than They Appear”, which appeared in 2011 at Green. “Electronic music at this point had become too small for me. I wanted to develop and progress more into the direction of indie pop”, Pitto remembers. So he began to cooperate with artists such as Alice Rose, Anna-Nicole Ziesche and Manuel Delago and even sang himself on some tracks of the album, which even though it sounds more experimental than his previous works is still treated as a classic.

With his EP “Richklap”, published in 2012 through Wolfskull, Pitto returned to his musical roots as a specialist for soulful vocal house. Followed up with a instant classic “You”on Defected in 2013 and the return on Green with another collaboration EP with Woodie S., “Shadows” in 2014. And yet there’s more to it than that. As part of the Stekker festival, which was co-created by Pitto, he initiated the idea “studio stekker” to invite a group of artists for a full week to make music together with musicians such as the Junior Boys, Mathew Jonson, Francesco Tristano and Minilogue, to name a few. “It feels like a hyper-creative holiday camp. There are no rules or borders. Artists are creating music and having a lot of fun at the same time. Getting to know each other, learn, explore. It’s really inspiring to organize and being part of this.” Beyond that, the Dutchman played gigs in supporting programs for Electronica acts such as Booka Shade and Bonobo.And every now and then, Pitto takes the time to create new music. “Fly Like A Bird” is the title of his latest accomplishment, through which he has once more re-invented himself. Instead of pumping house tracks, Pitto has crafted a guitar loop reminding of folk music, above which he lets his wistful vocals rise like a bird up into the sky. “I fly like a bird in the sky and I hope one day you’ll find me.”

“The idea of flying like a bird feels incredibly romantic to me — it was the inspiration for this song,” Pitto remembers. At the same time, however, there is this longing to be found by somebody very special. The longing for love and bonding. “Many of my songs have to do with love and all of its facets. At first sight, they are impulsive and full of energy, but deep inside there is some melancholic and sad quality to them. I believe in the power of opposites.” 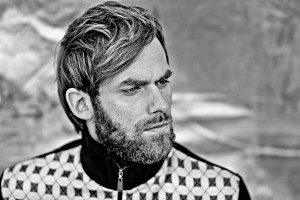