THIEF is a collaborative project between SASCHA GOTTSCHALK and two members of JAZZANOVA STEFAN LEISERING and AXEL REINEMER (together EXTENDED SPIRIT). So far THIEF is best known for his outstanding contributions to the SECRET-LOVE compilations as conceived by JAZZANOVA and RESOUL (Soultrade Record Store). He has also collaborated with people such as CLARA HILL, ANDRE ZIMMA and AIRMATE. After two singles (SK125 and SK129) the long awaited debut album by THIEF is finally standing on the starting blocks.

Already after the first few bars it is obvious that in THIEF Sonar Kollektiv have found one of the best songwriter teams of the labels entire portfolio. At the center of the project there is singer and guitarist SASCHA GOTTSCHALK who together with EXTENDED SPIRIT has managed to build a bridge between a classical singer-songwriter concept and the advanced studio productions of JAZZANOVA. Some pieces are very traditionally arranged with just vocals and guitar, while other tracks were the result of studio sessions – this was an exciting process for all involved and also marks a departure to new musical pastures. STEFAN LEISERING: “Never before have we occupied ourselves so intensively with song structures as we did on the THIEF album. It wasn’t about making 8 minute club track where one can still surprise people at the end with a gimmik, rather it has much more to do with songs and musical substance.”

Indeed some of the pieces are thoroughly orchestral arrangements, but occasionally there are still flashes of synth sounds and intelligently groovy beats which have become the mark of JAZZANOVA. Yet all the time THIEF stands on the (rather earthy) ground of musical facts.

The band was completed by a team of handpicked guests: besides the vocals, bass and guitar by SASCHA GOTTSCHALK and the production by EXTENDED SPIRIT (who also recorded keyboards and percussion as well of course as programming), other musicians have contributed to the arrangements and overall sound. These include CLARA HILL and GEORG LEVIN, who each sung backing vocals on one track,  the double-bass player PAUL KLEBER (who also plays with MICATONE, NYLON, LISA BASSENGE TRIO) and HARALD KÜNDGEN on vibraphone. On some of the songs there are also strings and a horn section.

Often the song writing and production is reminiscent of the BEATLES. Sunchild is very much in the tradition of the big studio albums of the second half of the 1960s. But as it was recorded in a modern studio the album naturally expresses new facets of this sound. Sunchild is in no way a retro album, but much more weds “classical” musical qualities with forward thinking production techniques. Folk and psychedelic sound, the audio openness of tremolo guitars and other “real” instruments meet the futuristic touch of typically JAZZANOVA synthesizers with their sometimes claustrophobic introvertedness. A perceptive prism of the senses comes about in combination with SASCHA GOTTSCHALK’s manic and sensitive lyrics.

One could suppose that the album concept was preconceived to fit the current musical zeitgeist but the album grew together organically, song for song, and so had time to develop. Of course, it should not be forgotten that with their SECRET-LOVE compilations, JAZZANOVA must count amongst the initiators of the current folk renaissance. Sunchild comes straight from the heart of the neo-folk movement and is also intended for true fans of this genre.

One thing’s for certain: with THIEF, JAZZANOVA and the Sonar Kollektiv have once and for all arrived in the world of song writing. 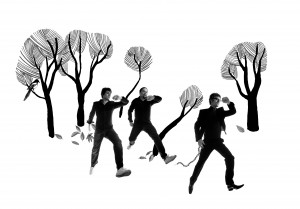