Tutu Amuse represents the musical and artistic union of guitarist, vocalist and actor Rosa Landers and drummer, composer, vocalist and producer Janek van Laak. Although the two multiinstrumentalists come from quite disparate musical backgrounds – with Rosa’s creative beginnings starting in the world of drama and jazz singing and Janek’s in experimental and improvised music – the pair had the shared experience of growing up in the same Kiez (or neighbourhood) in Berlin.

Having navigated their way through several lockdowns together in the infamous Marzahn concrete tower blocks of the capital, the duo used the time to create what is to be their debut album, aptly entitled “Two To Amuse”.

The album is a multi-faceted affair, with shades of Stereolab, Gainsbourg and purveyors of kinky Berlin nightlife from Helmut Newton to Bowie via Don Rogall. Assorted musical influences that include jazz, Afrobeat, soul, psyche and krauty duets are fused together to create something wonderfully unique, and as the title suggests, not without a sense of humour.

The album speaks to the listener in bold colours, and with a distinctly theatrical feel. It’s no surprise then that the couple hold the visual aspect of their music to be vital. Both in terms of their live performances, and in their forthcoming videos, we can expect some stunning and stirring sights that will simultaneously be avant garde and full of playfulness. With ample touring and more new music to come from this delicious doublet, this looks like being a momentous year for Tutu Amuse.

Debut album Two To Amuse is out 9th of September 2022 on Sonar Kollektiv. 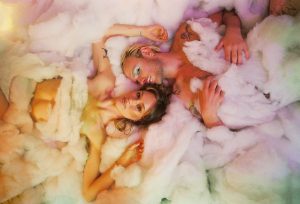