Two Banks of Four are Dillip Harris and Robert Gallagher.

One djs on Sunday night and learnt his trade in New York, the other mcees on Saturday night and is still wondering why he never learnt a trade.

They both live in London.

They both are involved in various musical projects.

They have both been on walks around the capital to make recordings of trains,the river police,and people shouting.

Neither have now, or at any time, been members of the conservative party.

They both have copies of Doug and Jean Carnes “power and the glory” but only one was given a copy of “black renaissance” (by one of the okino brothers).

Both went to dub basket east to mix the record with the Pheasants.

They both have various names and have a record coming out on red egyptian jazz.

Though neither make jazz music, one has a photograph of himself on top of a train in india as the sun is rising.

The other may well buy a velour tracksuit from Ridley Road market. 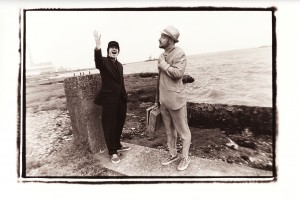