When and where Quintin Copper and Nasir Marc Imam (aka Nas Mellow) met for the very first time, is well kept secret between the two musicians both hailing from Esslingen and surroundings. Much more important for the devoted music lover is another fateful concurrence that happened years later, about four years ago, at a legendary party at the Pfleghof, a self-administered dormitory in Tübingen’s historic district. Quintin has been studying history here and made his first steps as an up-and-coming electronic music producer and as a member of several bands (f.e. Lachs & Lemke) which played mostly in clubs rather than concert venues. And here during dozens of spontaneous jam sessions with friends and flatmates it clicked with Quintin and Marc. Despite their diverging everyday life, the twosome has found each other again musically and as friends. Both decided immediately to join forces. Quintin’s love for soul, funk and jazz records, his passion for vintage synths and of course his feel for the audience as a virtuous DJ corresponded perfectly with Marc’s personality and musicianship. The latter discovered his fascination for music, singing and noises in all types of forms already as a six years old. With his beatboxing for hours on end he got as long on the nerves of his mother until she sent him to singing classes where he enjoyed classical training (including Bach and Mozart). As a youth he made his first experiments with a guitar and soon found out that he has a natural talent for song writing and that music is the best way for him to express his feelings and thoughts.

When Quintin (who was born in Sudbury, Canada by the way) and Marc decided to form a duo both knew from the beginning on that there won’t be an allocation of roles within this project. Songs are composed mutually; instruments are played by both variously and it seems both are blessed the same way with a soft spot for melodies. Only the lyrics are Marc’s sole task. His sporadic penchant for kitsch (one of his biggest musical idols is Frank Ocean, who is also well- known for his balance act between pathos, freakyness and bliss) is absorbed by Quintin’s down-to- earthness. The result: Every single song by the duo feels sophisticated, several times reconsidered by both of them and always furnished with just enough profoundness.

The recordings for the debut album «April Dreams» started back in 2017 in Quintin Copper’s room («Studio 19») in Tübingen, where by now he is graduating at the university. The album’s nine tracks were recorded almost exclusively by the twosome, only some contributions from friends (Nora Maleh, Marco Podobnik and Hakim Azmi) are added. An opus has come to light which is hard to assign to a single genre. The songs can be located somewhere between disco, neo soul, hip-hop and funk but as a unity compose an album which suits Stuttgart’s musical history quite perfectly. Since the city at the Neckar has always been Germany’s provider of funky notes and tones.

That’s what probably also Rainer Trüby thought when he received the unmastered tapes from Quintin Copper the other day. His enthusiasm for this incredibly fresh sound from his hometown was so big that he sent the files to some of his friends running their own record labels. Eventually it was Jazzanova’s Jürgen von Knoblauch who desperately wanted to sign Quintin Copper and Nas

Mellow for the label he co-owns, Sonar Kollektiv. There’s no further explanation necessary why Quintin and Marc’s music matches with the Berlin based label wonderfully. In any case, the two Swabians feel honoured to be able to follow in the steps of Jazzanova and can help to make Sonar Kollektiv 2021 even more fairly funky. 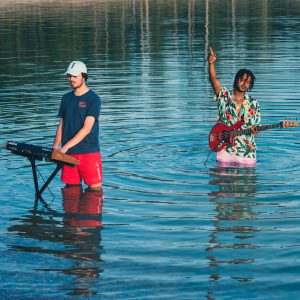