An estranged homage to late 70s NYC anti-culture, realized through the eyes of a Scottish born electronic musician living in modern day Berlin.

“It’s really fucking good. A gloopy mixture that ranges from Shriekback and Gang Of Four at one end to EBM, house and broken beat at the other, like a history of dance music thrown into a big AKAI milkshake” – Bill Brewster (DJ History)

The man behind Hot Coins, Danny Berman, is best known by his Red Rack’em moniker. A purveyor of the finest club music from hip hop and soul through to house and techno. A DJ/producer who has progressively climbed electronic music’s precipitous ladder of approval. A vinyl obsessive. A party starter from NG to BK.

“I played New Beat and Foxxy at World Unknown on Friday. Both sounded massive and had people asking what they were” – Andy Blake (World Unknown)

Quietly working on Hot Coins for the past four years, this very personal project is sonically inspired by Berman’s love of dance music’s fruitful 78-82 period that embraced the cross pollination of emerging post-punk, disco and electro scenes. Goths and futurists in England danced to Kraftwerk and DAF, New York punks and no-wavers danced to ESG and ‘Planet Rock’. Good times…

…and bad times. Lyrically, ‘Damage Is Done’ candidly delves into fear and paranoia motivated by the destructive excesses of modern clubbing. The dark side of the dancefloor, the inevitable comedown and the transcendence that can follow.

‘Foxxy’ encapsulates this, dispelling the myth that clubbing is exclusively reserved for celebration and revising it as a breaking down of pride, a lack of self-belief, a public surrender to humiliation. ‘Confined’ muses on trapped relationships; whether it be personal, professional or with something less animate. First single ‘Geek Emotions’ is a loser’s anthem for the eternal underdog. It means more when a geek wins than when a winner does – but geeks never win. No-one tells that story.

However, it is about dancing after all though: ‘Leathered’ is a Warriors inspired homage to the “homo-erotic nature of Italo-disco” and ‘I Ching’ is naturally described as “David Mansuso having tantric sex with himself in a NYC loft” (“Ching “is also slang for cocaine in Scotland).

“Checked out the album. Very nice on first listen! Already taken a shine to I-Ching, Leathered and Roadtrip. No doubt a few more will grab me. Good work!” – Ashley Beedle (Legend)

Remarkably, the album ended up being mixed in rural Austria on the world famous ex-Townhouse studios SSL 4000 B series desk which was used to mix Public Image Limited’s ‘Metal Box’ album and ‘In The Air Tonight’ by Phil Collins. This is the desk that the famous ‘gated reverb’ drum sound that defined the 80’s was invented on, so it’s fitting that the album was mixed on it.

“I’ve had a good listen to the album over the past few mornings, really love it. Danny should be very proud indeed!” – Ron Basejam (Crazy P)

As several of the tracks feature vocals from City Hayes and Berman himself, plus guitar (from Crazy P maestro Chris Todd and Paul ‘Peej’ Murphy) and saxophone (from acclaimed folk saxophonist Pippa Marland), the future lies in the live performance of these tracks. Hot Coins is currently hard at work in Berlin rehearsing in preparation for a live tour in 2013. 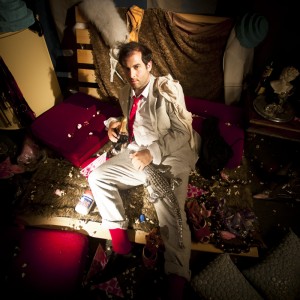