Member Of The Trick 02: The Bat EP

TRICKSKI are back with the second instalment in their 12″ series Members of the Trick for Sonar Kollektiv.
Following the Get Rich or Try Dying EP by LEROY & DARNELL (SK076),TRICKSKI now present two tracks of their own on The Bat 12″ (MOTT 02/SK110). Although still newcomers, TRICKSKI have already had tracks on Compost Black Label and have been licensed to Crosstown Rebels, Fabric and Get Physical. They even have more projects in the pipeline for diverse labels.

This is TRICKSKI’s second 12″ on Sonar Kollektiv. Their double A-side Sweat / Sunshine Fuck proved to be a top hit last year with CARL CRAIG including Sweat in his Fabric25 mix. Things look promising for TRICKSKI who also received airplay for that releases from the likes of BLACKSTROBE, TIEFSCHWARZ, DJ NAUGHTY, THE GLIMMERS, JAZZANOVA, PETER KRUDER and many more. The B-side of TRICKSKI’s first 12″, Sunshine F*ck Part 1, also featured on FABRIC26 mixed by GLOBAL COMMUNICATION.
At Les again ties TRICKSKI to the legendary man of the moment CARL CRAIG. This kicking track is a cover of CRAIG’s classic from his 97 album More songs about food and revolutiony art (Planet E). Indeed CARL CRAIG has given his full approval to this fresh new version. TRICKSKI have recorded it without using any samples, making this a genuine cover version. This massive tune is an eleven minute monster version – all those rocking synth sounds will make the crowd go wild!

B-side tune Grace is a prime slice of psychedelic slomo techno designed for the 2006 trance revival. The song is inspired by FRANCIS FORD COPPOLLA’s Apocalypse Now. Imagine GRACE JONES and COLONEL KURTZ (played by MARLON BRANDO) going wild in the jungle and you are close to what this cinenmatic tune sounds like. Both tracks are mixed by TRICKSKI and BO KONDREN of CALYX MASTERING in Berlin.

The Bat EP has been strongly anticipated for a while after TRICKSKI have been working on several remixes for artists such as MUSTANG, MOCKY and 12TH FLOOR. The TRICKSKI sound is fat and the idea of having one straight dance track and one more conceptional song is interesting and original. The next release of Member of the Trick is already in the pipeline.

Press Quotes:
“The hottest kollektiv with another masterpiece Trickski will burn down every house floor the Sonar Kollektiv world domination will be stronger than ever- gratulation!”
DJ Hell – 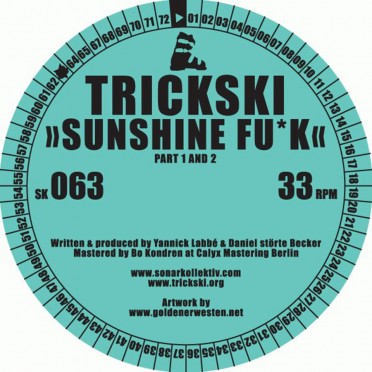