30-40 min. Live Sets of MICATONE, NEVE NAIVE and STEE DOWNES will give a taste of what will happen in the Sonar Kollektiv Universe during the next six months.

Some details: So far, MICATONE has released 3 successful Albums on SONAR KOLLEKTIV, the last one in 2005. Since then the Band members have been busy with other projects: The MICATONE driven mayor project NYLON, for example, released 2 new records and MICATONES leadsinger LISA BASSENGE intensively toured the recently released long player NUR FORT, the third of her Soloproject LISA BASSSENGE TRIO. But now they managed to finish their fourth record LIEBE GR†SSE DARLING, which will be released in March 2012 on SONAR KOLLEKTIV. MICATONE is playing around with Soul, Surf, Beat and Blues quotations. The main focus is on songwriting making LIEBE GR†SSE DARLING straighter, more grown up and solid. Check out MICATONE at the SONAR KOLLEKTIV Label Night during BerMuda at GRETCHEN!

The duo NEVE NAIVE consists of producer and multiinstrumentalist STEFAN \”MERSE\” ULRICH and the Singer NEVE aka ALEXA VOSS who writes the lyrics. MERSE is well known to JAZZANOVA fans as he plays the trombone at their band. He is also part of THE RUFFCATS. A band with the up coming FLOMEGA performing soon at the BUNDESVISION SONG CONTEST. NEVE has a solo Project called MISS FLINT and she is part of the Reggaeband JAHCOUSTIX and THE OUTSIDEPLAYERS. She also has experience through background singing for LAITH LADEEN, CULCHA CANDELA, FLOMEGA, MARTIN JONDO and MELLOW PARK. MERSES and NEVES music is lovingly and eccentric with honest and touching lyrics. A little bit naive and ironic: simply NEVE NAIVE! The Debut will soon be out on SONAR KOLLEKTIV.

In 2008 STEE DOWNES released his debut on SONAR KOLLEKTIV. The result has been an extensive tour with his live band. The STEE DOWNES BAND played on stages together with ROY AYERS, AMP FIDDLER, FAT FREDDYS DROP, BUGZ IN THE ATTIC and DJ SPINNA. As a Songwriter and singer he recently became a topselling beatport artist with the LOVEBIRD produced track WANT YOU IN MY SOUL. Collaborations with RAINER TR†BY, MOTOR CITY DRUM ENSEMBLE will soon be available. His new long player will be an important SONAR KOLLEKTIV release early summer 2012. STEE’s performance at BerMUDa 2011 will contain a solo guitar-, and a solo vocal part as well as a DJ-performance. We are curious! Watch out for the surprise act! Here is a little insight on the new Club Gretchen: In the middle of KREUZBERG, at the former stables of the 1. prussian guard dragooner regiment ãQUEEN VICTORIA OF GREAT BRITAIN AND IRELANDÒ GREETCHENS Design features both, an historic charme and a cool club athmosphere. From now on the beautiful cross vault with its filigran columns will be filled with sounds of bass driven beats and with lightshows. A future heaven for music lovers and dancers. 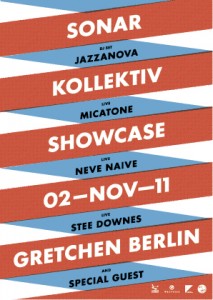 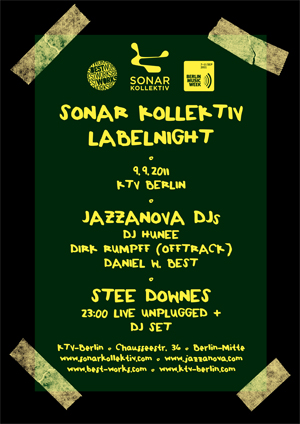 Read more 05 / 09 / 2011 See u at BERLIN MUSIC WEEK In 2008 STEE DOWNES released his debut on SONAR KOLLEKTIV. The result has been an extensive tour with his live band. The STEE DOWNES... Read more, please click 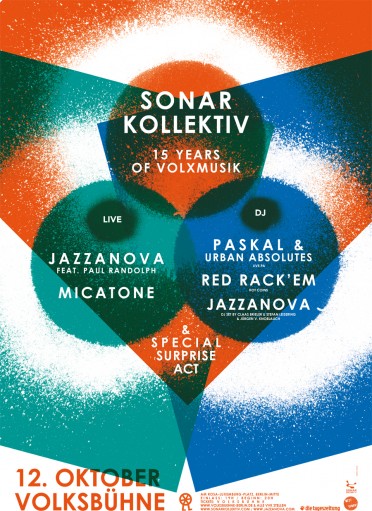 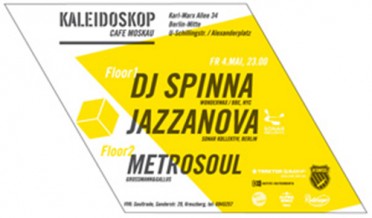 Read more 20 / 04 / 2007 Kaleidoskop @ Café Moskau It's high time for yet another kaleidoskop party! This upcoming friday (tommorow!) JAZZANOVA will be featured by the one and only DJ SPINNA.... Read more, please click