You’ll always find a reason to party if you will. Sonar Kollektiv’s 15th anniversary is more than just another invitation to let one’s hair down though. Let’s have a toast to one of Germany’s most significant labels on October 12th at the prestigious Volksbühne in Berlin Mitte. Two of the most closely related acts of the label, Jazzanova and Micatone, will play their birthday serenades. After an extensive festival tour this summer the nine-piece Jazzanova live band (featuring Paul Randoph) will finally premiere their new album „Funkhaus Studio Session“ in Berlin. It’s also quite possibly one or two surprise guests will enrich the birthday celebration with a performance. Because where else – even in the new musical capitol of the world – will you meet such a top-class cast in one place at the same time?

What’s more, lots of the DJs from the extended Sonar Kollektiv family will line up for this memorable soiree. Next to the Jazzanova DJs (Claas Brieler and Juergen von Knoblauch) there will be new Berlin resident Red Rack’em (the debut of his project Hot Coins will be out on Sonar Kollektiv) and Paskal & Urban Absolutes (with a live set) ensuring that the festivities will be on a top-notch musical level.

Sonar Kollektiv was founded in 1997 by Jazzanova. Designed as a platform for own releases it soon attracted numerous new discoveries and like-minded musicians to lead their trumps right here. Still it was never the intention of Sonar Kollektiv to pursue one specific sound or provide an already existing scene. Each and every release on the label (250 and counting) was at all times meant to illustrate the musical taste of the collective, its flavourful development and recollection of past sounds. The various compilations and label showcases played a big part of it. From the renowed „Secret Love“ compilation (No. 6 will be released these days), the „Computer Incarnations For World Peace“ edition, the  „…Boadcasting“ and „….Mixing“-series to the „Romanian Jazz“ label showcase Sonar Kollektiv continuously cares about broadening its own and the horizon of any type of music lovers. How broad this horizon can be expanded showed the release of Âme’s „Rej“ in 2005. Shorthandly minimal techno was redifined and at the same time the sublabel Innervisions (runned by Dixon) was leveraged to worldwide fame. Other milestones in the eventful history of Sonar Kolletiv were the discovery of the New Zealand reggae soul combo Fat Freddy’s Drop (2005), the debuts by Micatone (2003), Benny Sings (2005), Clara Hill (2003) and Eva Be (2004), the first releases by Dimlite (2003), Tricksi (2006), Christian Prommer’s Drumlesson (2007), as well as Georg Levin (2005) and his collaborative project with Dixon, Wahoo (2004). Also for some of today’s legends of more sophisticated electronic music, like Ulrich Schnauss, Ben Klock and Marcin Kozlowski (now a member of Whitest Boy Alive) Sonar Kollektiv offered a stepping stone to their international careers. And in 2003 a certain Eric Wahlforss released his first record here, just before founding Soundcloud.

When at the end of 2009 the rate of fire ceased some thought the label is running on empty or lost touch to contemporary sounds. But the releases of this year so far should prove doubters wrong. The remix album „Jazzanova Upside Down“ (released in January) gathers the who’s who of the currenty most happening and game-changing DJs and producers (Henrik Schwarz, Motor City Drum Ensemble, Filippo Moscatello, Manuel Tur, Mark E, and more) to catapult Jazzanova classics into the future. By signing Phil Gerus from Moscow, the new project Hot Coins out of the UK, EnaWadan from South Africa and the pan-Geman duo Paskal & Urban Absolutes four of the most promising new acts slantingly offside the dancefloor have been added to the already impressive roster. And once again all true pop aficionados with an addiction for soul and a genuine craft in songwriting are pierced to the heart with the brand new albums by FETSUM („The Colors Of Hope“) and Micatone („Wish I Was Here“).

But what is the formula of success of the Berlin based label? A dance music imprint that – with a few exceptions – actually doesn’t release club music? Is it even after all exactly this? Delievering music for prior to, succeeding and one day after a club night?

There’s no other German record label that can boast such an adventurous range of styles: reggae, folk, electronica, jazz, funk, calypso, house, techno and now also chillwave, dubstep, dream pop, and so on. At Sonar Kollektiv there’s somehow room for everything. Still, all of the 250 and counting releases have one common denominator: It’s music made out of passion – without any financial aim or attemps of ingratiation. From and for music lovers.

The 15th anniversay party on October 12th will be another unforgettable event in Berlin. Just remember the two label nights at the Staatsoper in 2004 and 2006 or the SK Festival 2007 at the Tape club. At the turn of the millenium there were already several label showcases at the Volksbühne – when the stage was turned into a dancefloor. On this evening we want to celebrate one more time what Berlin and Sonar Kollektiv respectively has become over the last 15 years: A melting pot of various creative influences, a conglomeration of multiple cultures and a stylistic perpetuum mobile which reinvents itself over and over again. If this is not reason enough to raise glasses to, what else should be? Here’s to another 15 years of Sonar Kollektiv! 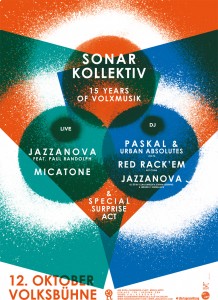 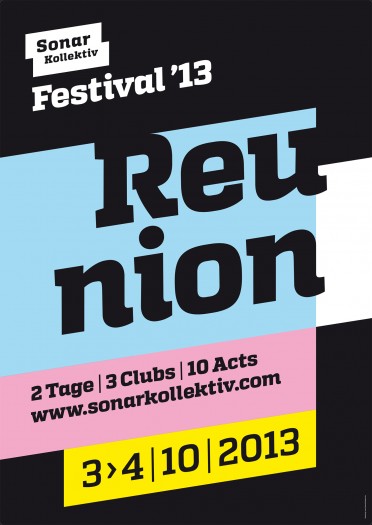 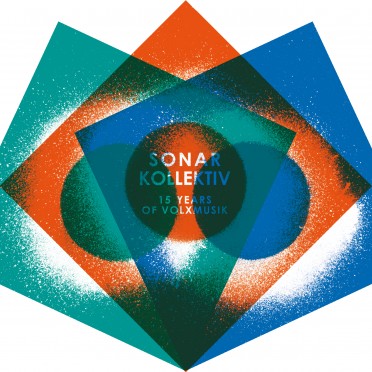 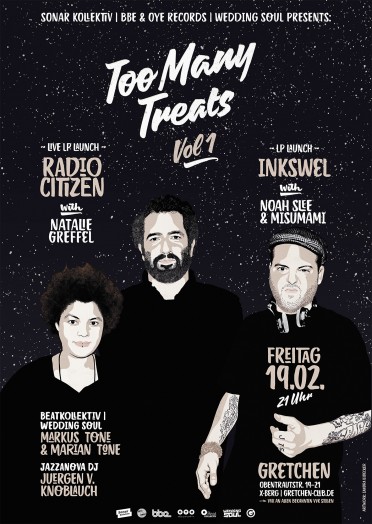