Following on from the success of such exotic compilations as their Paz e Futebol (SK089CD/LP) tribute to the greatest football nation of them all, Brazil, and the German Jazz samplers, Forum West (SK019CD/LP) and Focus Jazz – The Wewerka Archive 1966-1969 (SK108CD/LP) and Romanian Jazz (SK132CD/LP) – JAZZANOVA now bring you another very special collection: this time the subject is Cuban Jazz. This 18 track strong compilation presents some of the finest in Cuban music from the last century and includes great names from the Cuban scene such as CHUCHO VALDES, OMARA PORTUONDO and BOBBY CARCASSES to name but a few. The JAZZANOVA crew have been assisted on the track selection for this compilation by their long time musical friend ERIK OTT.

The compilation really is packed with the cream of the crop in Cuban Jazz music. The much-celebrated pianist CHUCHO VALDÉS, son of bandleader BEBO, founded the experimental GRUPO IRAKERE in 1973. As a solo artist he is represented with two tracks. Opening the compilation with La Sombra plus the rich piano-saxophone duel, Triton, while his band GRUPO IRAKERE’s track Juana 1600 fuses the traditional Cuban sounds with breaks of Soul and Funk; the horns are explosive and the rhythm’s frenetic – this song is gonna make you sweat!
The beautifully sung harmonies on Tema 4 sound like BURT BACHARACH’s chase scene soundtrack in Butch Cassidy & Sundance Kid. TEMA 4 are also represented on the compilation with another song. Gorgeous harmonies, a slightly out of tune guitar and some interesting changes characterise their short but sweet song Yayabo which also appears on the 12″ single (SK165/jazz club) that accompanies this CD compilation release.

EMILIANO SALVADOR is one of those artists admired by all musicians and specially those playing the piano; he is what American Jazz men call a “pianist`s pianist”. SALVADOR has turned into a legend, not only among Cubans but also within the Afro-Caribbean and Latin Jazz enthusiasts. In 1978, EMILIANO recorded his first LP Nueva Visión, from which the title track comes, and it’s precisely this work that makes him known worldwide. SALVADOR is also heard tinkling the ivories in his unmistakable style on the delightful number Son en 7/4; only a musician of this calibre names his song after the time signature!

OMARA or OMARA PORTUONDO to use her full name sang on WIN WENDERS’ documentary film Bueno Vista Social Club under the musical direction of RY COODER. In fact, a member of the important Cuarteto D’Aida during the ’50s and ’60s, OMARA was the only female voice on the Buena Vista Social Club album. So her Soy Cubano really had to be on this compilation. ORQUESTA MARAVILLAS DE FLORIDA were founded in 1948. New York Salsa star RAY BARRETTO had an international hit with his version of their song Prestame Tu Mujer. Their tune Buscame el Abanico that is featured here is embellished by a lovely flute part and syncopated percussion that’s going to make you tap your feet and shake your hips. The legendary BOBBY CARCASSES is one of Cuba’s most revered jazz musicians. He has recorded and performed with Cuban Jazz masters CHUCHO VALDES, CHANGUITO, CESAR LOPEZ, and many more. As a performer, recording artist, and entertainer, BOBBY is extremely versatile: vocalist extraordinaire, percussionist (conguero), flugelhorn player, pianist, visual artist, actor, and dancer. His astonishing tune Emiliano 1ro is based on a classic salsa rhythm and carries the listener along at a typically fast pace. All these and many, many, more make this compilation something for connoisseurs of this exquisite Cuban sound. The CD is packed full with greats from the Cuban scene, it functions as the perfect reference for those who really want to know where its at in Cuban Jazz.

JAZZANOVA’s Nueva Vision compilation again shows what an open-minded taste in music they have. And it is this first class taste in music that makes them one of the best A+R teams in the world and has led to so much great music being discovered, played out in clubs and ultimately released on their label Sonar Kollektiv. This selection sees JAZZANOVA going even further in the direction of world music – an under explored path that they do well to bring to today’s ears. Cuban Jazz music is gloriously happy music that will fill your life with sunshine. Some of the best songs in the genre Cuban Jazz are gathered together here on this collection so it will please those already familiar with Cuban music and want to find out more as well as newcomers to the scene.

“Another interesting lesson from the compilation kings”
SkinnyMag.co.uk –

“paying their respects to the genre”
SocialistWorker.co.uk – 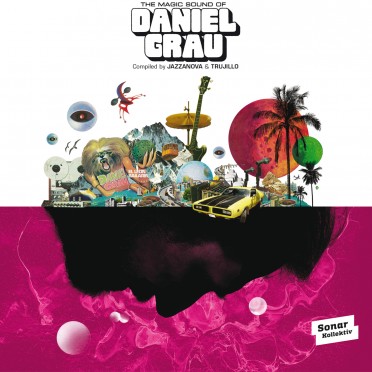