Joris Feiertag is on a roll right now. After releasing the much-praised EP «Severance» at the beginning of the year, the producer from Utrecht is about to up the ante. «Heal» is the name of his second work on mid-length this year. This time he dedicates himself again to merge different genres and to break up gridlocked categories over the span of four tracks. It’s of course the rhythm that determines the beat as well as the mood of all of his compositions. «Bliss» floats vaguely rushed but leisurely joyful at the same time through unknown sceneries and surprises with exotic sounds and lots of inspiring ideas without turning too much left field at any time at all.
On the opening track «Without You» it’s a dashing beat again that defines this sparkling pop song contrary to the current mainstream. It’s the outstanding voice of Colin Lee Vermeulen that works almost like another instrument.

Whereas on «Hold Your Own» the rhythm alternates between breakbeat and dub reggae displaying impressing again how skilled the arranger and producer Joris Feiertag is. Here we have the majestic tonsils of UK based singer Oli Hannaford (with whom Feiertag has worked on several projects before) that lifts the song to higher grounds.

It’s obvious that «Heal» is the seamless continuation of the idea behind «Severance» (the EP from January) so to say. You can hear this most effectively on «Hush», Feiertag’s very own vision of modern, warm sounding and at the same time arousing house music somewhere along the way between the club and at home. Like this – by releasing two EPs instead of one album – we’ll have more of Feiertag at the end of the year. 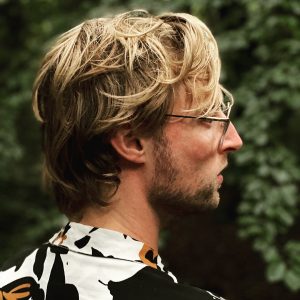