What is your background ?

…originally I come from the HipHop and Reggae-Scene in the 80s, spinning on Jams and doing a Soundsystem called “LuckyPunch”. In the early 90s I worked in a Recordstore and discovered House and the straight Bassdrum through artists such as Larry Heard, Lil Louis, Mark Kinchen..etc.

What is the origin of the Soulphiction’s name ? And why this name ?

What do you search to explore and to reach through your music ?

..I try to reach more people that are bored of most of the stereotypical club-sound of nowadays,open them up for more musical influences than you could hear in a regular DJ-set. When I spin, I like to spin in waves, showing people the classics as well as some new stuff, from slow to uptempo…same with my album.

..I simply love music at all.!

..I thank god that I can make a living out of it…

Why is black music so important in your musical world ?

My Family-background is totally Classical-influenced, mixed with some Who, Zepplin…

…I grew up with a lot of friends coming from the american military bases, and we traded mixtapes…we had a lot of great recordstores in south-germany, most of them were about BlackMusic, Jazz, Motown, Disco, HipHop and early House,it touched me most when I first heard HipHop…that must have been around `82 or `83…

after that I got into digging records seriously.

for me, black music always was more emotional, while european stuff was more technologically inspired.

With which artists do you feel close to ?

…everybody who`s doing his own shit, no-jealousy people,….too many to name…

What is the musical differences between your different names ?

What is your musical dream ?

What would you like to say about your music ? 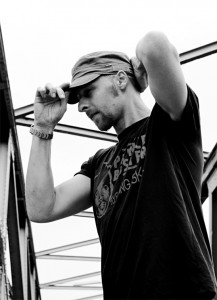