Most artists might find releasing their first album in a decade a bit daunting. But Jazzanova aren’t most artists. Rather, they’re an entity in a constant state of becoming. Right from the very first moment they came together as a group of DJs in 1995, there was no template for what Jazzanova would be, and at every stage they have had to make up the rules as they went along. Never adhering to one particular scene or sound, never pursuing one particular technique or format, they’ve acted as a DJ collective, a production house, a prolific remix team, radio programmers and presenters, label owners and curators. Constantly, this has been with one foot in club culture and the other in the live arena: the place where they’ve been most active in the last decade. And all of these streams of creativity have flowed constantly over the past two decades plus, quite naturally towards the gorgeous depths of The Pool, their most mature and absorbing record yet.

When the team of Alex Barck, Claas Brieler, Axel Reinemer, Jürgen von Knoblauch and Stefan Leisering first met, they were all deep into a club scene that revolved around – as Stefan puts it – “funk, jazz, disco, Latin… all kinds of things – but mostly old records.” Their initial impetus for getting into the studio together was simply “to have something new to play in DJ sets along with the old stuff!” It took a little while to find their feet, but when their self-released lighter-than-air concoction of Brazilian shuffle and cosmic soul chords “Fedime’s Flight” started circulating among DJs in 1997, things suddenly accelerated massively. Hooking up with Michael Reinboth’s Compost label from Munich – already well established, with its Future Sound of Jazz compilations big sellers internationally – they formed JCR (Jazzanova Compost Records), and beginning with two Jazzanova EPs in 1998, a torrent of musical activity was underway.

“The first four or five years [after our first record] were super intense” says Stefan, and that’s no exaggeration. Jazzanova were quickly in demand the world over, connecting with scenes and other musicians from Kyoto to Philadelphia and all stops in between. In and out of the studio constantly, remixing and producing, they built links to other musicians, touching on neo-soul, broken beat, nu jazz, deep house and all kinds of other wonderful sounds, without every completely succumbing to any one thing. Thus they could work with Philly rapper Capitol A just as easily as with European house heroes Dixon and Âme. This all led towards their debut album In Between in 2002: a glorious mixture of radical experimentation and classicist sounds, with a rich cast of vocalists and instrumentalists. But where for many the album would be the be-all-and-end-all, here it was just another strand along with their remixing, curation, DJing and gradual moves towards rendering their compositions in the live arena.

And here is where the brilliance of the Jazzanova model becomes apparent. All the while, they were very much feeling their way, assessing projects as they came about, trying to fit them into their sprawling web of individual commitments. But rather than produce something completely chaotic and unmanageable, this led to an unusually sustainable way of working. Where classic bands have to rely on the album-tour-album-tour cycle to keep them visible in the media, Jazzanova’s multi-limbed, multi-tasking nature meant there was always something there for fans: composing for modern dance shows, compiling from the legendary Blue Note jazz archive, keeping the JCR and Sonar Kollektiv labels running. Indeed, as Stefan says, half-joking, of the distribution problems that complicated their 2008 Of All the Things, “Sometimes I wonder if people even know we made a second album!” – but in many senses this was the least of their worries. Again, the album was only one string to their bow.

And so, the ten years between Of All the Things and The Pool passed fast. Jazzanova never slowed down, they never ceased making those musical connections with scenes, other musicians, and fans. OK, during that time, most of the members of Jazzanova did take time to start families, but the nature of the beast was such that the music just kept on coming. Most of all, the 2010s have been spent touring the globe, Jazzanova’s live sets lighting up festivals and arenas wherever they go – and, once again, constantly evolving. “None of us were trained musicians,” says Stefan, “so everything we do has been a learning experience.” As anyone who’s followed them will know, the progress of that learning happens at an astonishing pace: even those very first 12″ releases had remarkable sophistication even though they were driven by pure instinct for what would work on a dancefloor. Thus, 20 years on from those first 12″s, the amount of musical understanding that has amassed is immense: because it reflects non-stop experience and immersion in sound.

All of which brings us to The Pool. It’s easily Jazzanova’s most complete album. “There’s a lot of influences that are similar throughout,” says Stefan: “the way we use sampling in a particular way, the way we play instruments in the studio, I think it gives it a very coherent sound.” He’s absolutely right: the combination of the tens of thousands of hours of experience on the live stage, in the studio, on the radio and in the club have given the Jazzanova guys an unmistakeable confidence, a solidity to everything they commit to recording, that you can hear in every beat and note. And you can hear that this is a “grown up” record too: there’s much less of the darting from rhythm to rhythm, style to style, that you might hear in their earliest records – everything is about the logic of the individual song. Yet for all that, there is scintillating colour that shifts from minute to minute. As ever there is a great cast of collaborators, and each singer or rapper brings their own flavour to the piece.

The Pool came together through constant playing and playing around with samples. Stefan recalls starting with ten track sketches, of which only a couple became songs: “but that’s the best way – we prefer to just do something, rather than discuss and plan.” As ever, the multifaceted nature of Jazzanova is what keeps everything alive. And as ever, they’re constantly active: this album of course will generate more shows, more remixes, more connections. But it’s also generating the urge to make yet more new music. Once back in the studio, it became very apparent that the collective creative spark was just as strong as it is on stage or in the myriad side-projects, so you definitely shouldn’t expect it to be another decade before the next album. This is definitely the start of a major new chapter in the endlessly fascinating story of Jazzanova. There’s still no template for what they are, they’re still making up the rules, and that’s precisely what keeps their music so very wonderful. 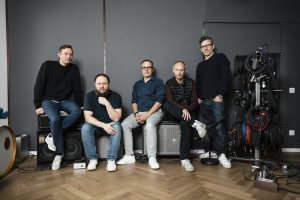